The cultural study of the Turi 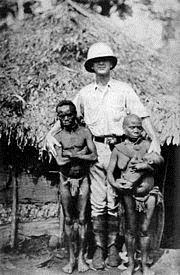 Our biologist Morgan Hunt has the pleasure of announcing that he successfully ended his study of the Turi tribe. During his five month stay Hunt became fully accepted by the Turi society and was granted to take part in several religious ceremonies which no white men had ever seen! What follows is never been published before and is especially recorded in an attempt to fully understand the diversity of the Mbuij Mayian tribes. The Turi tribe occupies the territory of the Turi plains from the outskirts of the Mtembe jungle to the in the north and the Mburi River to the east. Their territory consists mostly of arid savannah dotted with termite hills and acacia trees. Although the Turi adapted to live in these vast savannas, approximately one fourth of their territory exists of dense jungle. These dense jungles are known for their huge Malip-trees and their large variety of dangerous wildlife.

The Turi are a small but proud negroid race, during a recent measurement of the men, the average height was one and a half meter! Adjusted to the harsh climate of their homeland they survive by hunting and collecting berries. The male Turi are known for their excellent hunting and tracking skills and however the Turi-community is mainly men-orientated the women are treated as equal. These women are the backbone of the entire Turi-society as they raise the children and look after the elder. These elders have a very important status in the tribe and have the supreme power and many of them are advisors of the tribe leader. The Turi are also very superstitious as they often sacrifice food and weapons to their ancestors in exchange for a protection against evil jungle spirits or simply as a blessing for a good hunt! The elder who are also the shamans of the village are often specialized doctors able to heal most diseases by using rare mountains herbs which can only be found in the Black Mountain range. When the heads were counted in 1880, the tribe consisted of 526 members. However this number seems rather large for a nomadic society, the members are spread among several small settlements in which the wives and elder permanently live. The men however are divided in several smaller groups or the so called hunting packs. These hunting packs only return once in a while to their village to deliver dried flesh and furs. The villages themselves only gather once or twice a year for the great hunt. In these hunt, hundreds of Tulip, gazelle-like animals are chased into large nets and caught. Many of these captured herds are traded with the mountain people for metal tipped spears, pottery and rare mountain herbs. However the last years the immense herds of Tulip are dwindling and the Turi are obliged to hunt in the more dangerous jungles. The cause of this phenomenon is not unknown to the Turi as they blame the Black Mountain lion, the biggest predator of the Black Mountains. Their folklore tells the tale of the exodus of their ancestral tribe, hunted like animals by huge packs of hungry Black Mountain lions, they were driven from their safe jungle homes near the . Half of the tribe fled to the plains and the other half crossed the Black Mountains in search of a better homeland. The ancestral tribe became divided by the Black Mountains into the Turi and the Suri. The Turi plains became the new homelands of this tribe but not adapted to a life on the vast and hot savannas their numbers dwindled. The Suri which crossed the mountains were never seen again, tales of immense stone cities as tall as mountains often return into the tales of the elder but none knows the truth.

However the Turi are a strong race, Hunt strongly believes that the Turi society is in decline as most of the Turi youth wages their lives in an attempt to reach the more civilized coastal regions. Without fresh hunters, the Turi society is doomed to extinct without British intervention!

Posted by Wargame News and Terrain Blog at 9:03 AM